The Business of Freelance Journalism Session 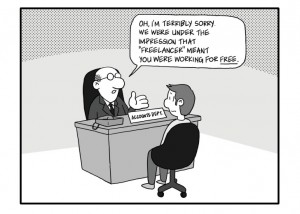 For anyone who has ever dreamed of hanging a “Professional Writer” sign and making writing your full-time gig, get the inside scoop on the do’s, don’ts, snags and joys of being a freelance journalist and writer.

Chris Benjamin has worked in Halifax as an independent, self-employed freelance journalist for the past eight years and has written for a long list of magazines and newspapers in Canada and the United States. A few highlights include The Globe and Mail, Science Friday, Chronicle Herald, Z Magazine, Canadian Dimension, This Magazine, Briarpatch, Saltscapes, Halifax Magazine, The Halifax Examiner, Progress Magazine, and The Coast. He received honourable mention in the 2009 Canadian Journalism Awards.